GIT is unarguably the most powerful, feature-rich, and stable version control system (VCS) out there. It’s a distributed VCS, which means that all contributors have a copy of the entire repository, along with all the change history.

This makes it easier for different people to simultaneously work on a project, without encountering conflicts. It also means that there is no single point of failure, i.e. even if the repository server crashes, a copy from any developer machine can be used to restore it.

If you do a man git on your machine, it will show you hundreds of commands, along with their descriptions. This can be overwhelming, especially if you are just getting started. The good part is that you don’t need to know all of these commands, just a small subset.

In this article, we will be sharing a GIT cheat sheet with the top 50 commands every GIT user should know.

Let’s start with the very basics.

GIT maintains a log of all the changes/snapshots/commits ever made to a repository. You can switch back to a commit at any time, or undo a change you made in your working directory. Here are a few commands to remember in this regard:

Each commit in a GIT repository can be identified by a unique hash identifier. This command lets you undo a commit using its hash.
Remove a file from the staging area, without modifying anything in the local directory.
Permanently revert back to a previous commit. Please note that this is a potentially dangerous command, as it undoes all of the changes after the specified commit.
Temporarily transform your working directory into the state it was in at the time of the specified commit.
Permanently revert the last two commits.
Perform a “dry run” of the clean command to see which files will be removed. It’s recommended to use this command before executing git clean –f.
Remove untracked files from the working directory. Before using this, run the git clean –n command to see which files will be removed.
Remove/untrack a file or directory from GIT.

When a feature has been fully developed and tested, the branch can be merged to the main repository. Here are a few important branching commands to know:

Here is a list of commands you can use to monitor and inspect GIT history:

Now let’s talk about that part of GIT that no one likes: resolving conflicts. Conflicts arise when more than one people change the same line in the same file, or if one person deletes a file while another modifies it. Most people encounter conflicts while merging/rebasing branches. Here are a few commands that can reduce the pain of resolving conflicts:

Set your preferred editor as the default merge tool.
Open your editor of choice to resolve conflicts in a more user-friendly way.
Take the changes from your branch for the file during a merge, while discarding the incoming changes.
Take the incoming changes for the file, and discard the changes in your local branch.
If you are in the middle of a manual merge, and have made a grave mistake, you can abort the merging process using this command.
Set the diff3 merge style, which is much more intuitive than the default one.

To finish off our GIT cheat sheet, here are some other useful commands that can come in handy:

Push a locally created branch to the remote repository.
Unstage local commit without undoing changes.
To merge the specified commit to the current branch.
To merge the contents of only one folder from the specified branch.
Change the message of the most recent unpushed commit.
Rename a file.
Instruct GIT to ignore the specified file, i.e. never track it.
View the difference of what is in branch Y, but not in branch X.
Ignore the changes in a tracked file. 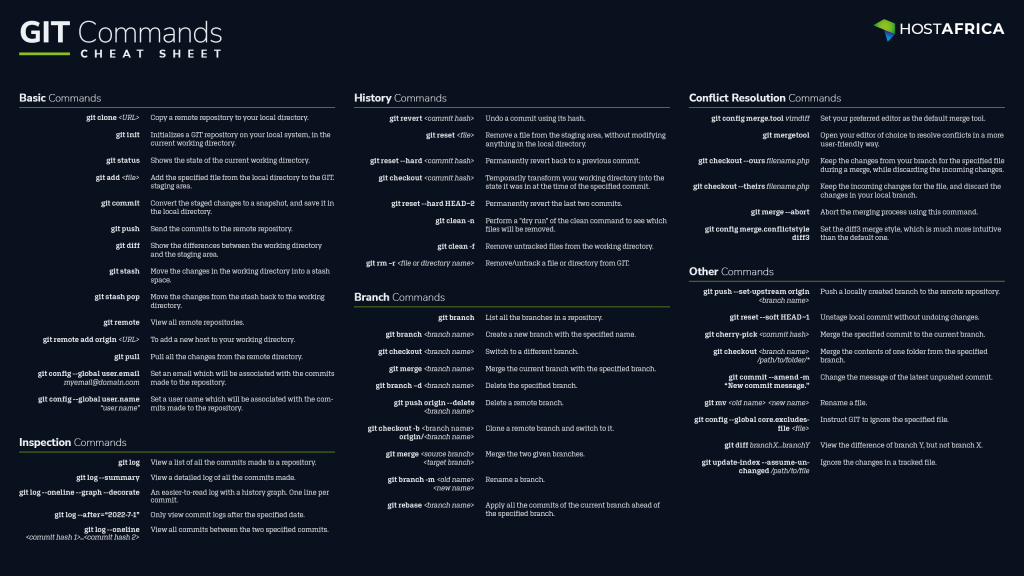 Not sure whether to use WooCommerce or Shopify to build your online store? Check out this comparison before you decide!