Beginner’s Intro to Git on GitHub

People often use the words Git and GitHub interchangeably. While connected, both are their own entities. Git is a version-control system (VCS) used to manage a source code repository. GitHub is a cloud-based interface written on top of Git, that allows its users to create and manage Git repositories.

When it comes to version-control systems (VCS), none come close to Git in terms of performance, stability, and ease-of-use. Git is a distributed VCS, which means that all collaborators of a repository not only fetch the latest versions of all the files, they actually mirror the repository in its entirety. This prevents the creation of a single point-of-failure, which is usually the biggest problem associated with centralized VCS. In case a server fails, the fully versioned copy of the repository from any collaborator’s local machine can be used to restore it.

In this guide, we will walk you through:

This guide assumes you’re familiar with the command line.

What is GitHub and Why Should You Use it?

GitHub is a supplementary service for Git users, giving them a graphical user interface (GUI) to manage their source code. Here are some of its benefits:

How to Install Git

How to Install Git on Debian 9

Installing Git on Debian 9 is as simple as running the following command:

How to Install Git on Ubuntu 20

Installing Git on Ubuntu 20 is as simple as running the following command:

How to Install Git on CentOS 7

Installing Git on Centos 7 is as simple as running the following command:

How to Install Git on Windows

If you have a linux terminal setup on your Windows machine, you can use the above linux commands as well.

Before you can commit changes to a repository, you have to set your account’s default identity. Use these commands: Replace email and username before running

Now that we have git installed on our machine, we can proceed with creating our first Git repository. A repository, or repo for short, is a place to house the source code of software applications. It contains all the files, change logs, and any other relevant metadata.

There are two kinds of repositories: remote and local. The latter is hosted on a contributor’s local machine. The former is hosted on a central location, e.g. GitHub. For the sake of this example, we will create a remote repository on GitHub. It’s also the recommended choice, because it allows all contributors seamless access.

To clone the repository we just created, follow these steps:

If at any point you want to check your local repository’s status, use

The output will tell you which branch you are on, and whether or not you have any local changes.

A local Git repository contains three version trees. The first is the working directory, which is the files in the current state on your file system. The second is the staging area, known as the index, which contains all the staged changes that haven’t been committed yet. The third tree is known as the HEAD, which is a pointer to the latest commit you have made.

Now, let’s try to commit some changes to our new repo:

Your committed changes reside in your local HEAD. Use git push to push them to the remote repository:

Note: You may be asked to authenticate after running push. Also, before you push changes, always make sure that you are on the right branch using git status

It’s a good practice to analyse local changes before pushing them to remote. git diff is the command used for this.

For example, to compare changes to remote repository use:

When you create a new repository, by default the main/master branch is created, which usually reflects the latest stable version of your source code.

A recommended practice is to create a new branch whenever you want to implement a new feature. Once the development and testing has completed, the changes can be merged back to the main (more on this below).

To create a new branch and switch to it:

To switch back to main:

At this point, the branch is only available to you locally. To push it to remote:

Merge or Rebase a Git Branch

Merging and rebasing are two different ways to move changes around different branches. When you merge a branch onto another, commits of both branches are integrated. However, rebasing takes all the changes of the source branch and adds them after the last commit of the target branch. See figure below: 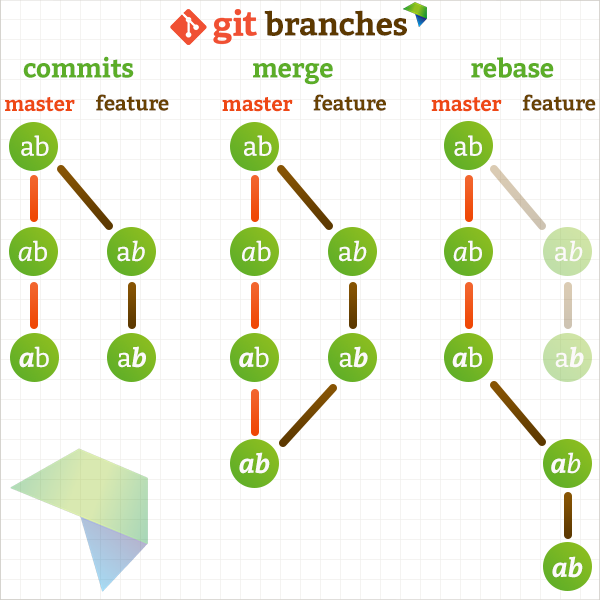 You may need to do one or the other on different occasions. For example, if you have a feature branch that only you are working on, it makes sense to bring new changes from main/master repository to your branch using rebase:

However, if a feature branch is shared between different collaborators, rebasing isn’t recommended, as it can lead to inconsistencies. Use merge instead:

Git logs are a great way to go through your repository’s history. Simply running git log will display the complete commit history, along with names of authors etc.

To see all commits by an author:

To see a file’s history:

It’s a recommended practice to tag software before releasing it. Git gives you a way to attach a tag to a commit:

where 1c923eb9f0 are the first 10 characters of the commit hash. You can get them using the git log command.

If you have untracked changes in your working directory, and want to switch to another branch, git won’t allow you unless you commit or stash them. Stashing simply takes your local changes and puts them in a safe place while you switch and play around on a different branch:

Once you have come back to the original branch, you can get the changes back using:

Revert to a Previous Git Commit

To temporarily revert to a previous Git commit, use:

To revert to an old commit permanently, and push the reset branch to remote:

Note: Don’t do this if you are sharing the branch with other people. As it will permanently alter the branch, and force others to resynchronize with the latest state

To discard all locally made changes, use:

These are just the basics to get you started with Git and Github.

While Git and GitHub are very powerful tools, you’ll also need a platform to test your code. Docker containers are very effective for creating rapid testing environments for whatever you’re coding.

Use our guide How to Install Docker on Linux and Windows to get started. You’ll need a Virtual Machine (Cloud Server) to run all these Docker containers.

In this quick guide, we provide an overview of DNSONLY show you how to set it up in WHM/cPanel. Commands included.

The 7.4 version of WHMCS comes with a lot of benefits that your clients will surely enjoy. Let's take a look at some of these features.